Two is better than one

In June 2015, eBay and PayPal decided to cut their ties and become two separate, publicly-traded companies. The e-commerce and payments landscapes were changing, and both businesses wanted to focus on their own competitive opportunities and challenges.

eBay’s independence came with a new team of C-suite executives who wanted to refresh eBay’s strategy and culture to help the company become a next-level competitor.

eBay’s Global Talent and Organizational Development (GT&OD) team was responsible for nearly a dozen of these transformational initiatives. For example, the company wanted to completely change the way it does performance management to align with its new culture, by shifting to a model where leaders are responsible for setting their teams up for success through on-going performance and development coaching.>

Rolling out initiatives on this scale—and seeing successful adoption—wasn’t a light lift.

“eBay’s ability to embody and absorb that much change in such a short period of time was questionable,” says Jackson.

The GT&OD team partnered with other internal teams—such as eBay’s HR leadership team, HR business partners, and global communications team—to launch the initiatives. At any given time, hundreds of stakeholders were involved in keeping the projects moving forward, and they had to juggle initiative responsibilities with their day-to-day roles. Responsibilities included determining if there was a real need for a product or service, designing and building it, launching it to the company, and analyzing adoption. Many stakeholders were working on multiple initiatives at the same time, with overlapping launch dates and deadlines.

GT&OD members started to receive feedback from stakeholders, saying they were overburdened and struggling to stay on top of initiative decisions, activities, and milestones. Since the initiatives were managed independently, there was no easy way to identify the root of the problem or come up with a solution.

They needed a holistic and integrated view of the initiatives so they could make better decisions around planning, timing, and prioritization—and adjust dates or stakeholder groups’ involvement as necessary. The Excel spreadsheets and project plans they’d been using weren’t cutting it. So they partnered with Slalom to create a solution.

“The model helped establish a universal understanding of the amount of work and time required for different milestones across all initiatives,” says Jennifer Richmond, consultant manager of organizational effectiveness at Slalom.

From there, eBay created portfolios for all the initiatives, assigning the appropriate RACI score to each of the milestones.

Slalom collaborated closely with eBay to start designing an interactive Tableau data dashboard based on the portfolios. We needed to create something user-friendly and visual, so all stakeholders and leaders could easily gain insights from it in real-time.

“Marianne was clearly passionate about the impact of the programs while conscious of the burden they were putting on the many employees at eBay. So I was excited about helping them get more visibility,” says John Mathis, Slalom’s data and analytics practice area lead.

Before building it, we met with eBay multiple times to discuss our visions, share iterative drafts, and get their feedback.

“I worked directly with Slalom’s developer, and we co-developed the tool,” says Jackson. “The speed at which they worked was phenomenal.”

Together, we created a dashboard that enables users to see high-level trends and timelines, and also drill down on specific initiatives and moments in time to find bottlenecks. 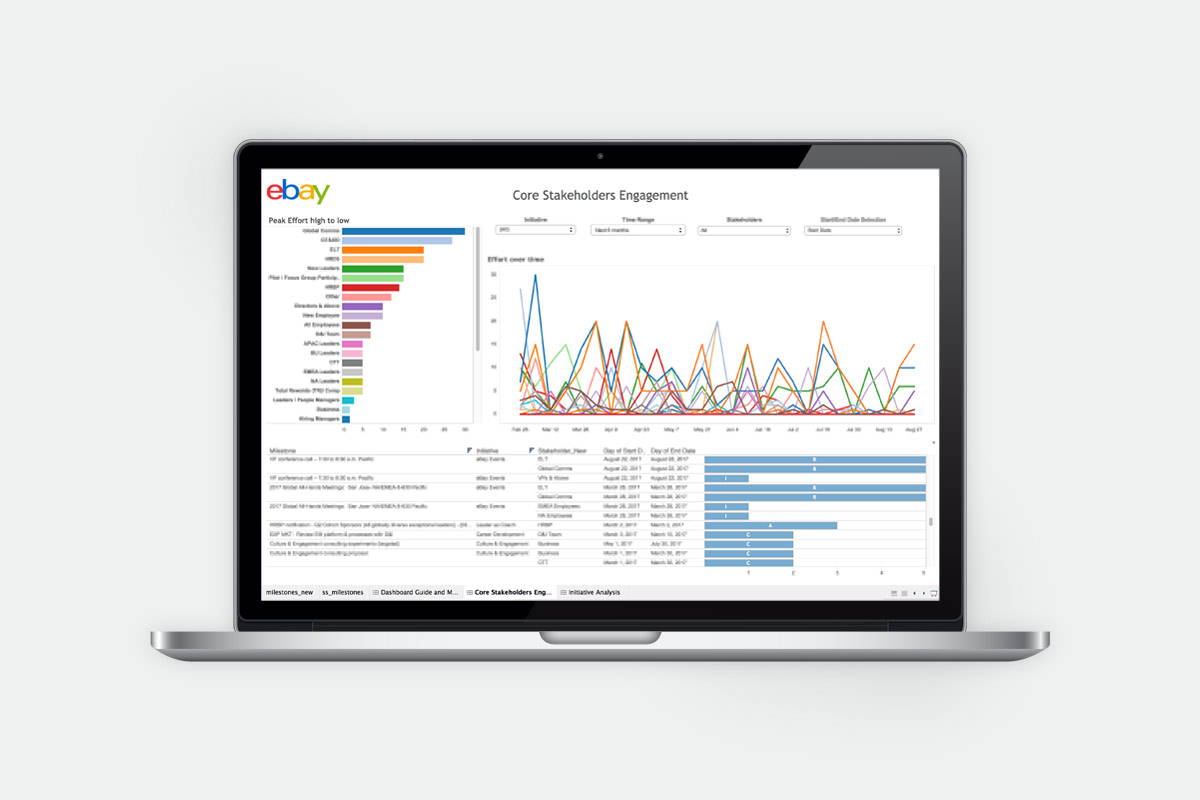 GT&OD teams meet once a month to go through the dashboard and assess timelines and workloads.

Surprisingly, the stakeholders that GT&OD thought were less engaged—for example, HR Business Partners (HRBPs)—were actually very engaged but were overwhelmed by the number of activities and tasks they had to help their clients with across multiple initiatives. Leaders also discovered that stakeholders were most overburdened mid-to-late January and mid-February.

“We also recently loaded big company events into our dashboard so we can see how those take up people’s capacity,” says Jackson. “And we can promote relevant culture work and initiatives at their events or piggy-back on their communications to help spread awareness.”

It was an intuitive and flexible way to understand the impacts of the programs on the various stakeholders, so eBay could make better decisions about scheduling and ultimately create a better experience for eBay employees.

With these insights, GT&OD can help relieve burden by shifting assignments to other stakeholders, adjusting timelines, or working with stakeholders to better manage their capacity to support the work. And initiative leaders avoid planning any additional events or big meetings during peak times. As a result, stakeholders’ workload peaks have leveled out.

Based on the GT&OD team’s success, other teams at eBay that manage multiple concurrent programs are looking at implementing the dashboard visualizations, too.

As GT&OD continues to improve stakeholders’ change capacity, it’s on track to deliver eBay’s company-wide transformations in the 18-month time frame—helping eBay continue to lead and innovate the e-commerce industry.

“Slalom’s tool is the first of its kind, and it’ll raise the success probability of our complex change efforts.” – Marianne Jackson, chief talent development officer at eBay 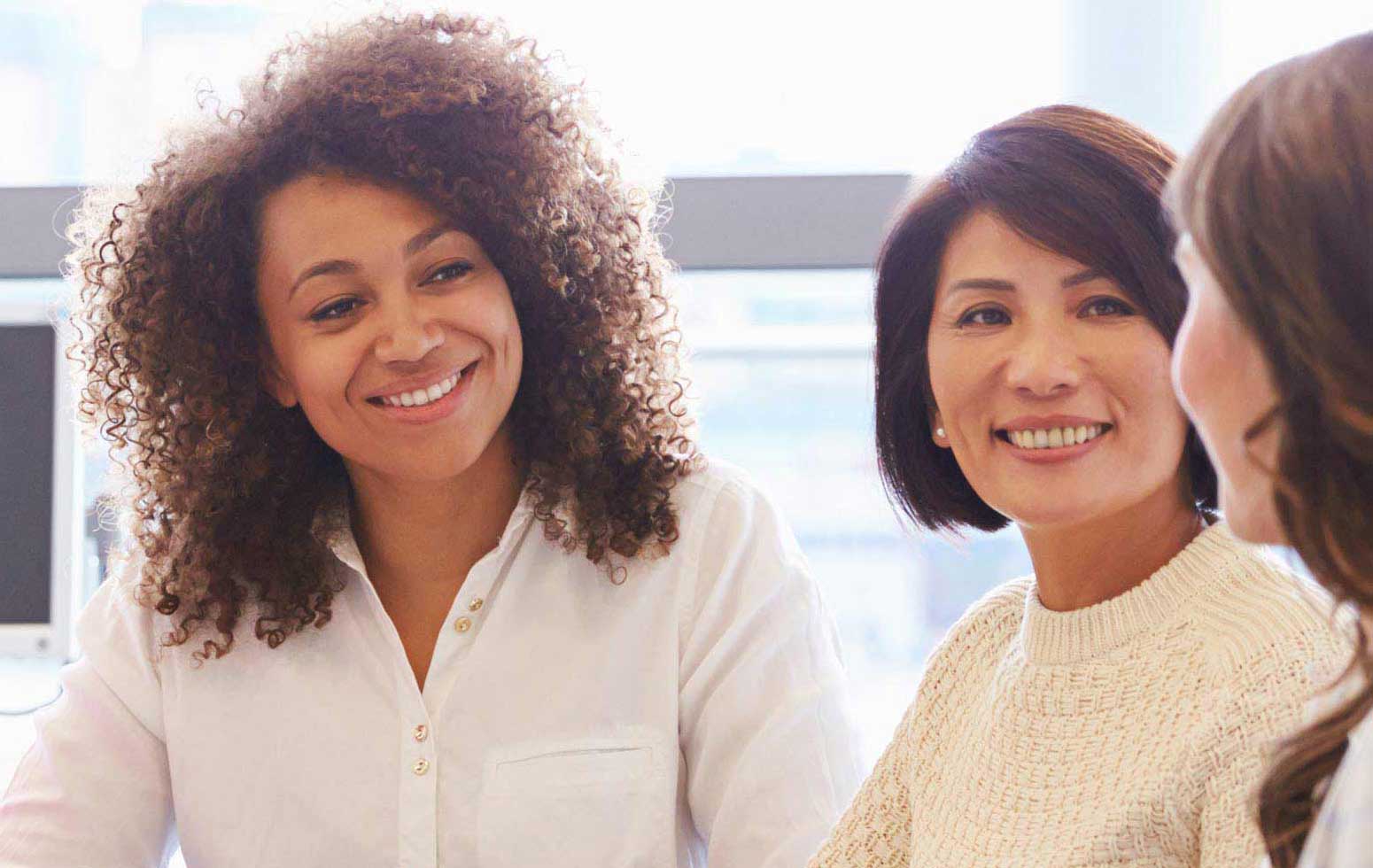 We don’t need another hero: What makes a great project manager?